BATTLE OF THE BLADES wraps up its fourth season

Amanda Evora and Scott Thornton were crowned Season 4 champions! “The time of my life” is how Amanda described her Battle of the Blades experience. For Scott Thornton, ‘rewarding’ is what this has meant to him. Also rewarding (to the tune of $100,000) is the donation to the Canadian Breast Cancer Foundation, the charity they both supported. Marie-France Dubreuil’s efforts are also helping the Canadian Breast Cancer Foundation. Mathieu Dandenault’s supported the Montreal Canadien’s Children’s Foundation and what that means is a shared $30,000 donation from the team by placing third. 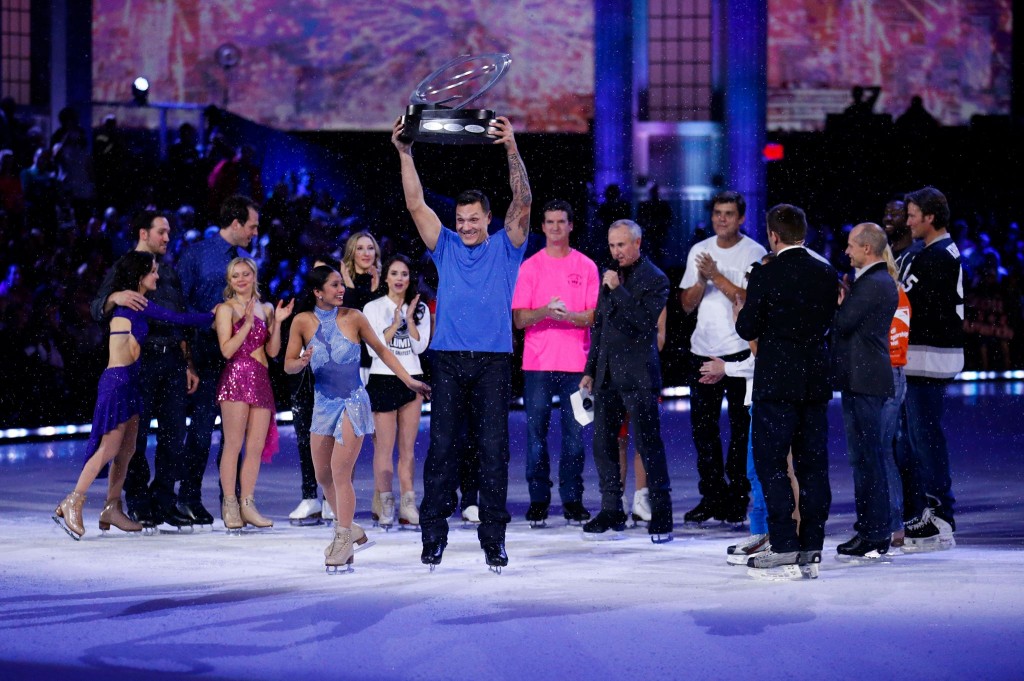 Supporting charity has been the driving force behind the show for the skaters. Finishing in second place for Violetta Afanasieva and Jason Strudwick earned a shared $35,000 for the Humane Society of Kawartha Lakes and the Edmonton Inner City Children’s program respectively. “The joy of communicating with the audience” is how Violetta expresses the best thing about her Battle of the Blades experience.

Bourne is a 10-time Canadian Ice Dance champion and three-time Olympian. Carter, from Scarborough, played 16 NHL seasons for a variety of teams, including the Vancouver Canucks and Edmonton Oilers.

Charities: World Vision Starting Strong Program (Bourne) and Shirt off My Back (Carter)

Dubé is world pair bronze medallist, three-time Canadian champ and two-time Olympian. Savage is an Olympic silver medallist and was assistant captain of the Montreal Canadiens for nine seasons during his 12-year NHL career.

Returning from seasons 1 and 3, Dubreuil, a five-time Canadian national ice dance champion, is paired with Dandenault who was a had a storied 13-year NHL career as a three-time Stanley Cup champion with the Detroit Red Wings.

Evora is a two-time U.S. pairs silver medallist and the first Filipino-American to compete in the Winter Olympics. Thornton totalled more than 1,459 penalty minutes over his 17-year NHL career that included a stint with the Toronto Maple Leafs.

Hinzmann, returning from Season 3 of Blades, is a two-time U.S pairs medallist and Olympian. Krushelnyski is a winner of three Stanley Cups with the Edmonton Oilers.

Both Kerr and Marshall say it was easy to choose where they would send the money if they won the title.Kerr has a 30-year-old brother, David, who lives with autism and as being cared for by her parents in her native Scotland.

In 1990, Marshall was temporarily paralyzed by a check to the boards while playing with the Ottawa 67’s. He was told he would never play hockey again but recovered and earned 239 points in 700 NHL games.

Parachute, his charity of choice, is a national charitable organization dedicated to preventing injuries and saving lives.