Playback names Insight the TV Producer of the Year! 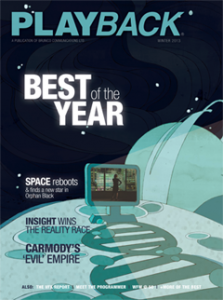 Insight attributes its success to its bench strength in producers and other talent. Its full-time staff numbers 28, but Brunton estimates in June the prodco was employing 500-600. “John and I strive to make it fun, and we all act as a team and everybody respects each other. It brings back staff show after show,” Bowlby says.

Brunton adds: “I think we have a great touch when it comes to working with talent – from editors to on-air hosts, rock stars, temperamental directors and writers. Insight is a great place for creative people in that they are welcomed and honoured here.”

Check out the issue here: http://playbackonline.ca/content/pdf/51670.pdf